Notes on the History of Bicester Batt. Home Guard

We had as yet no uniform except a white armlet with the letters LDV on it, and the additional C.C. or Pl.C. or S.C. for Coy, Platoon and section Commanders. Later on khaki armlets were issued instead of these. We had no rifles. We were not allowed to rent an office but had to get what accommodation we could by borrowing.
On May 30th Capt. Gillender joined the H.Q. as Quartermaster. The only office we had been able to get was one room 10 ft. x 12 ft. on the second floor of the Air Raid Precautions (ARP) Office so with the C.O., Adjutant and Quartermaster present it was somewhat overcrowded. The intention at that time was to keep office work down to a minimum. We were told that the only return we could send in was a weekly return of enrolments and arms. The arms were, of course, privately owned, we also had to show all the ammunition we possessed.
At that time every volunteer had to be given a special LDV Identity Card, since abolished, and a considerable correspondence was already starting on the subject of village defences and protection of areas where enemy gliders might land.

*By December the number of Tommy Guns had increased to 42.

On June 2nd the Zone Commander, General Courage, came round part of the Coy Area inspecting sites for barricades etc. the idea being to block each main road at each end of every village.
No arrangements existed at that time for the payment of travelling claims but we were given a limited amount of petrol coupons and the T.A.A. refunded the cost of petrol used on LDV duty. We had no cash or imprest account and the cost of postage etc. paid by us was refunded once a month by the T.A.A.
On June 5th the CO. received one hundred rifles .303 but no pull-throughs. Pull-throughs were more scarce than rifles and we were very short for many months.
On June 7th we saw the first tree and wheel block erected by Mr. Rule at Deddington. This now became the standard type of roadblock and the Divisional Surveyor at all important sites gradually erected these. Up to this time we had to make roadblocks of any material we could get in the villages.
On June 8th we received our first Denim uniforms and after this we gradually began to get the men into uniform but it took some months to get enough to fit the whole Coy.
On June 10th Coy H.Q. was moved to the Lodge at the Garth, which was lent to us by Mrs Keith-Falconer. This accommodation appeared to be large and roomy. Coy HQ had two small rooms and one very small one on the upper floor so the ground floor was used as a store and as an office for the Bicester Platoon. We did not realise that the HQ staff would grow too big for this office.
Towards the end of June Miss Evans joined Coy H.Q. as a clerk and typist, the first of our clerical staff to join. We were not allowed to buy a typewriter but she bought one of her own. Up to this time the Adjutant had written all letters and orders to the Platoons and correspondence was increasing because we were now organising a system of observation posts which were manned from dusk to dawn, Subsistence Allowance had not yet been instituted but that would soon come
It was by now arranged that church bells were to be rung as a warning that a certain number of parachutists had landed near the particular village.

Towards the end of June we were warned that in the event of an invasion, the line of the River Cherwell might, under certain circumstances, be held as a line of defence. Pln Commanders reconnoitred all the river crossings. A considerable number of pillboxes were built near the bridges over the river which was done by C.R.E. who selected the sites.
About this time also, orders were issued that anti-tank blocks were to be built on all roads leading to Bicester at a distance of about two miles from the town. A Royal Engineer (RE) Officer selected the sites for these and they were built by the Divisional Surveyor, Mr. Gander. These consisted of concrete walls on either side of the road with concrete cylinders, which could quickly be rolled into the road to block it. The remains of these blocks still exist.

During the first week in July the Coy received 200 more rifles .303 making 300 rifles in all, but again very few pull-throughs.  Also at this time the Company having reached a strength of fifteen hundred men, became a Battalion. Ammunition was very scarce so we could do very little musketry.
On July 11th Capt. Graham became O.C. Bicester Coy in place of Mr. Nicholson who resigned. About the middle of July the Local Defence Volunteers became the Home Guard.
We had as yet no grenades or other weapons for attacking tanks so we were ordered to make and practice with Molotoff Cocktails. We made them with old wine or beer bottles filled with petrol, paraffin and coal tar. There was a rag tied around the middle of the bottle that was tightly corked and before throwing the bottle paraffin was poured on this and then the rag was ignited. When the bottle burst on hitting a tank the whole of the contents would catch fire. Capt. Ramsbotham of Woodstock Coy carried out experiments in Blenheim Park and on July 21st he gave us a demonstration. We found that unless the bottles were thrown with considerable force, or dropped from a fair height, like an upper window, they could not be relied upon to break even if they hit a stone road.
At the beginning of August the Battalion received 740 American rifles .300 and the .303 were returned to the T.A. Shortly after this we received a few Lewis Guns and Browning Automatic Rifles (BARs)
In the middle of August we were given permission to appoint a paid Administration Officer and Mr Durrant, Platoon Commander Kidlington, was appointed. Mr Davies became Platoon Commander Kidlington in his place.

Up to this time training had been very difficult to arrange as we had no instructors but in September some Permanent Staff Instructors (P.S.I.'s) were attached to the T.A.A. and were sent to various Battalions in turn. About the same time, short weekend courses, for Platoon Commanders and N.C.O.'s were started at Cowley Barracks.
On the night of September 7th/8th there was a 'Stand To' as invasion appeared probable.

In November Bicester Town was taken out of Bicester Coy and was made into a Town Platoon directly under Battalion H.Q.
By the end of November the Battalion had 5 Vickers guns, 4 Ground Lewis guns, 25 Air Lewis guns and 60 Browning Automatic Rifles in addition to 750 .300-06 rifles.

On December 6th Capt. Douglas and Major Fane went to Denbies for a course of instruction returning on December 11th they were the first Officers of the Battalion to go on a course at an Army School.​

In January 1941 Capt. Ramsbotham handed over the Command of the Woodstock Coy to Col. Barnett and on January 28th Major Fane became O.C. Battalion vice Col. Lloyd Mostyn who had resigned at his own request.
About this time the issue of battle dress was begun but it was some months before the whole Battalion was supplied with battle dress.
On March 3rd Capt. D.N. Whitaker M.C. Royal Berkshire Regt., joined the Battalion as Adjutant and Quartermaster.
In April the Officers were given their Commissions. The C.O. had been given his in March. The cadre was then as below: 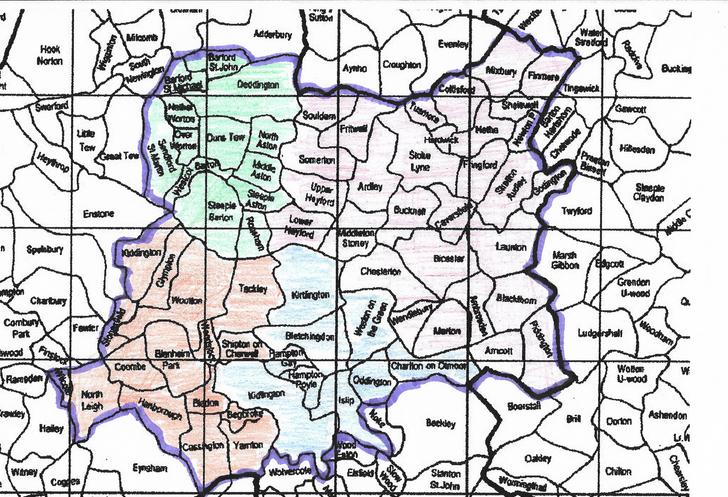 Recruiting for the Local Defence Volunteers (LDV) in the Bicester Police District began on May 15th 1940. Volunteers had to give their name to the Police.
At that time the papers were full of accounts of the landing of German Parachutists all over Holland and Belgium. Similar landings seemed likely to take place in this country, and many men joined the LDV and were expected to patrol around their villages between dusk and dawn armed with shot guns, and to shoot parachutists as they came floating down.  Men talked of the LDV as the anti-parachute army.
On May 20th  Colonel. Lloyd Mostyn was appointed O.C. Bicester Coy LDV.  At the time there was only one Battalion in the County each of the present Battalions was then a Company of the County Battalion.
On May 26th General Courage, the County Battalion Commander called the first meeting of the LDV in Oxford: it was attended by Coy Platoon and Section Commanders.
On May 27th Col. Mostyn had his first Platoon Commanders. Conference in Bicester, it was attended by:

On May 5th Sergeant Major Money,Oxfordshire and Buckinghamshire Light Infantry, joined the Battalion as P.S.I.

In June Second Lt. the Rev. W.L. Smith was commissioned as Transport Officer and Col. Sir George Schuster as Lieut. in command of Ledwell Platoon. Mr Dunbar-Kilburn becoming 2i/c of the Platoon.

In July the Area Commander made Col. Fane and Capt. Daviesbombing instructors. They were the first instructors to be appointed. All bombing instructors at that time had to be appointed by the Area Commander.
The first bombing parade with live Mills Grenades took place on July 24th The C.O. appointed Capt. Davies as Battalion Bombing Officer and the training of other Officers and N.C.O.'s to become instructors was begun. Unfortunately Capt. Davies was accidentally drowned on August 3rd Capt. Anderson succeeded him as 2i/c Kidlington Company and Lt. Wilson became O.C. Kidlington Platoon.

In August the Battalion had the following weapons besides rifles: