Sten gun – 2 no. (care required, liable to fire if dropped!)

Interesting facts:
Combe and Stonesfield were grouped together with a retired school master Lt Watts in charge and 2nd Lt Geoff Green officer in charge of Combe. (He had training with the OTC whilst at school and had experience with a Vickers water cooled machine gun). Every two weeks Lt Watts and 2nd Lt Green went to the Woodstock Company for supplies and orders. Bicester was the Battalion Divisional Headquarters and a photograph taken there includes Lt Watts and 2nd Lt Green.

There were two road control points with a pole across the road, Park Road by the playing field and Akeman Street near the junction of Stonesfield Road. A shepherds van was parked on the field ( now the play area) for operations control and rest. One member of the unit, Mr.Buggins had a motorcycle so was appointed as dispatch rider (but never required). The entrances to the village and the bridge over the railway were guarded, requiring people to show their identity card to pass. One night they stopped someone who they knew and asked for identification. He refused saying, don’t be silly you know me, so they cocked their rifles and pointed out a man sleeping on the side of the road and said that man there refused to show his card and so we shot him! He very quickly produced his identity card! A range was set out by Grintley Bridge for target practice using a .22 rifle.

Phil Butler
Go to Next Page

Hitler's Attitude To The Home Guard

Gilbert (Tory) Batts Recalls:-- We used to parade at 9.00am which was awkward.  I had to bike to Monks Hethe which was almost 3 miles.  I had to milk 12-16 cows by hand, see to them and the other animals and get back here by 9.00am.  It was hell of a job and I got into trouble several times and was threatened by Mr Thornton from Mixbury who was the local schoolmaster at Buckingham, with Court Martial because I wasn’t there on time.  It was about impossible to get back to change and parade at the village hall in that time.

- We used to be on duty all night.  3 blokes went out at a night from 10.00pm to mid-night.  Two more went out from 4.00am  to 6.00am in the morning.  It was a wet, cold miserable morning and we used to patrol down the Bride Rd to the top of the village along the road there to watch out for any paratroops or things like that.  A the weather was so bad I said to the blokes who were supposed to go out on patrol “I tell you what stop in here (the village hall) this morning, no one will know.  We can go out the back way and across the paddock then down through the village at 6.00am”.  Of course when Thornton came in the morning I was sat there and they were still laid in bed.  Of course I got into trouble for that.  He was over the top sometimes which was ridiculous but I suppose he had a job to do.

Jess Hodgesrecalls - "When Westcott was established as an airfield they said it couldn’t be defended.  We were helping out there and some Hampshire Regiment was ordered to attack it as part of an exercise with a mock attack.  I can remember we was up between here and Westcott aerodrome sat in a ditch all night. Somebody said “We can’t see anybody”,  “Of course you can’t because the blokes who came and cut the wire at Westcott aerodrome have been and gone and are waiting at Finmere Aerodrome where the bombers were, to go back home!”.  The Landlord of the Roebuck said they called in and had a pint before they went back to Finmere.  It’s laughable really 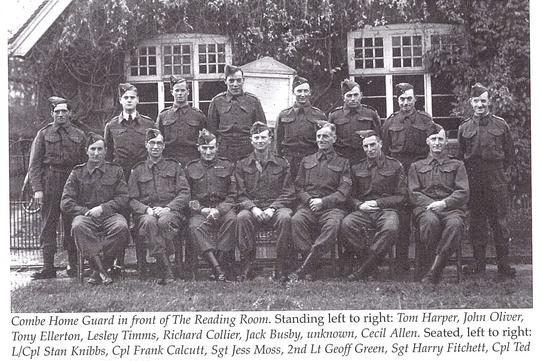 Germany today gave warning that it would treat members of the Home Guard which the British are forming as franc-tireurs (Guerillas) and the German short-wave wireless station broadcast in English the following warning:
​"German official quarters once more warn the misled British people and remind them of the fate of Polish franc-tireurs and gangs of murderers.  Civilians who take up arms against a German soldier are, in accordance with international law, no better than base murderers, whether they be priests or bank clerks.  British people, you would do well to heed our warning!"