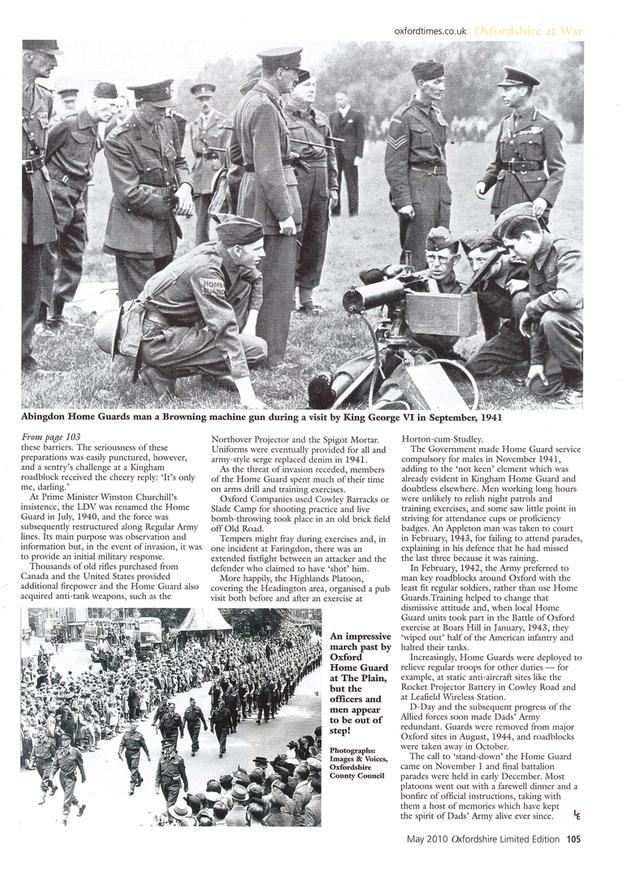 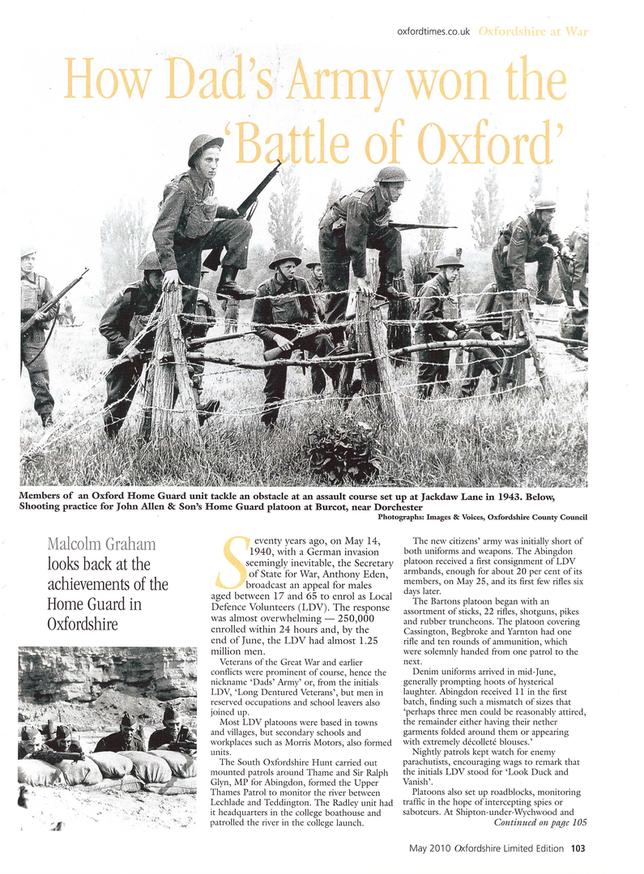 With acknowledgement to Staffs HG Website an excellent reference source

The Fall of France in May 1940 sent shock waves across the British Isles as the threat of an invasion by Nazi airborne forces seemed a real possibility having been used so successfully in Norway and then again to great effect in Holland.  On the evening of 14th May 1940, Secretary of State for War Anthony Eden appealed for men aged between 17 and 65 to  register for service in a home defence force to be known as "The Local Defence Volunteers". The response was immediate and overwhelming as thousands of men - many of them veterans of the Great War - enrolled for service in the new force. On 23rd July 1940 the LDV was renamed "The Home Guard" at the insistence of Prime Minister Winston Churchill, even though Eden strongly opposed this change of title having just paid for 1 million armbands bearing the letters LDV.

The LDV/HG were initially, never  meant to be anything other than a form of Special Constabulary and were not expected to enter into battle with the Nazis. As earlier stated the main threat to Britain was perceived to be from enemy parachutists and so LDV/HG units were deployed to observe likely 'drop zones' or 'glider landing zones' and if enemy activity was observed to then report the sighting to the regular army who would  deploy and deal with the threat.   However as time marched on and the training and quality of recruits increased the Home Guard would become a well trained and capable fighting force.

The Oxfordshire Home Guard was originally commanded by the reassuringly-named Brigadier-General A. Courage, but in November 1940 General Courage retired as Zone Commander, his replacement being Captain the Hon. B. Mitford RN.

There were, by this time, seven Oxfordshire Home Guard companies with headquarters in Banbury, Bicester, Chipping Norton, Bullingdon, Henley, Oxford and Oxford University. Following the publication of Army Council Instruction 653 in June 1940, these units were subsequently organised into eleven battalions of varying strengths, the larger units such as the 1st (Banbury) and 2nd (Bicester) battalions, having over 1,500 men and 1,600 men respectively, while the 3rd (Chipping Norton) Battalion ultimately had a strength of 60 officers and 2,191 men. Home Guard units were later affiliated to their local county regiments and as such the Oxfordshire Home Guard were permitted to wear the Oxfordshire & Buckinghamshire Light Infantry cap badge as depicted at the head of each of our pages.

A shortage of weapons and equipment led to LDV units arming themselves with anything they could lay their hands on.  It wouldn't have been strange to see patrols out and about armed with shotguns, staves, coshes, air-guns or anything else that they were able to 'liberate'.  The shortages of everything were so acute that when mounting guard the relieved sentry would not only pass on his duty but would also hand over his helmet, armband and, if he had one, his rifle and, if he had some, his 5 or 10 rounds of ammunition.  The press and public alike were very quick to ridicule these men who 'were playing at being soldiers' and several nicknames were accorded to the force.  The Long Dentured Veterans being one as many of the original volunteers were WW1 veterans, the Last Desperate Venture being another moniker.  One that would rankle though was the 'Broom Stick Army' mainly because Goering, the Nazi Luftwaffe commander, latched onto this and boasted that his "superior troops would sweep away this Britisher broomstick army with impunity". One nickname however, actually summed up the initial objective of the LDV/HG and that was the  Look Duck and Vanishbrigade; remember they were formed to  Lookfor the enemy, on sighting the enemy they were to  Duck out of sight and then  Vanish back to their platoon or company HQ and report the activity.

Despite the tribulations and anger caused by the shortages of weapons and uniform things began to improve for the LDV.  (LDV priorities had been pushed to one side from mid-May to early June as the government struggled with the problem of rescuing the BEF from Dunkirk (Operation Dynamo) . Later in the year however, and certainly by the Spring of 1941, things were improving, more so since Churchill became involved. The hated denim uniforms issued to many units were replaced by Battle Dress and Ross rifles from Canada and M1917 and P14 rifles from the U.S. began to arrive in significant numbers.  Thereafter, "matters gradually improved' until every man had a personal weapon, and all manner of  improvised munitions and  weaponry began to appear in HG units including the Northover projector.

The final strength of the Oxfordshire Home Guard, when it was officially stood down in November 1944, was around 12,500 men. The  battalions were as follows: