The enamel badge shown above was issued to members of the Women's Home Defence (WHD).  The WHD was founded in June 1940 by Dr Edith Summerskill, a Labour M.P for Fulham West, whose aim was for women to have a role in armed defence alongside the Home Guard.  This was bitterly opposed by the War Office.  Other  groups, namely the Amazon Defence Corps, under the leadership of Venetia Foster in London and the Women's Home Defence Corps, under the leadership of Miss Watson-Williams at Bristol,  were being formed   The Secretary of State for War was petitioned for  equal membership of the Home Guard and that "women of the Home Guard shall be trained in the use of handling of firearms, and that firearms shall be issued to them"   These women's organisations and groups all came together and formed a new national wartime organisation, named The Women's Home Defence (WHD).  Not surprisingly, the War Office refused to recognise the WHD!

Some Photos Courtesy of Getty Images.

Following Anthony Eden’s wireless appeal on 14th May 1940 it wasn’t just men who flocked to the Police stations to enrol their services.  Women too dashed down to volunteer but were turned away, their services being refused.  Not to be completely outdone many ladies turned their attentions to other roles joining rifle clubs, the ARP and other voluntary essential services.  However, women were not going to be denied their time and so pressure was put on the government to allow them to engage in home guard roles.  The matter was strenuously raised in the house by the prominent MP Dr. Edith Summerskill and was bitterly opposed by the War Office.  Due to this other groups sprang into existence such as the Amazon Defence Corps headed by Venetia Foster in London.  Miss Watson-Williams formed the Women’s Defence Corps in Bristol.

In an attempt at changing the government’s mind these different groups were brought together under the title of  Women’s Home Defence and appeals were made to allow the training of its members in the handling and use of firearms, this was flatly rejected.

Despite the government’s attitude many women joined the home guard in an ‘unofficial’ capacity mainly carrying out administrative tasks, first aid training, cooking, typing and similar. Finally in 1943 the authorities backed down and gave official permission for women to become members of the Home Guard.  There was a stipulation however; the women were to be recruited solely in non-combatant roles.  On the enrolment form candidates were asked to select from being a driver, a typist, a telephonist or a cook. Additionally no uniform was to be granted to the WHGA only a plastic/bakelite badge as depicted at the top of this page.

Despite the hard-line government stance many women took part in full HG duties learning unarmed combat, marksmanship and other distinctly un sanctioned activities previously considered to be the domain of the men. 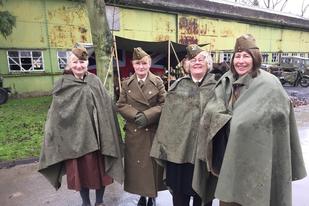